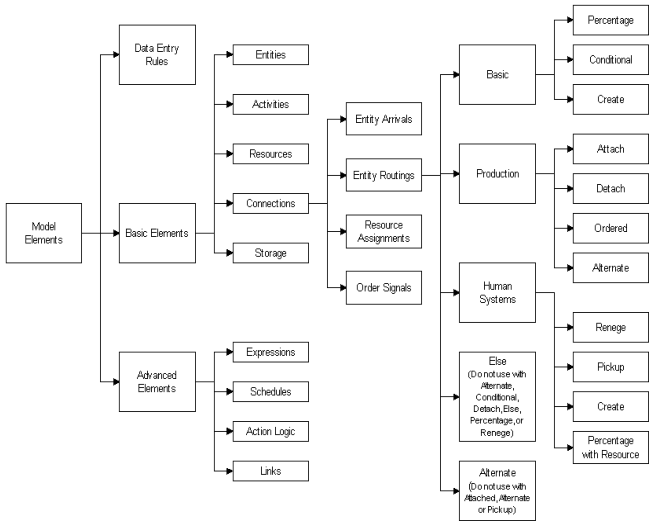 ProcessModel requires names and numbers to be entered following some simple rules. You should be familiar with these conventions to ensure that valid entries are made in your model.

Using descriptive, but short, names is recommended. The name you enter in the properties dialog for a resource, for instance, could be used in Action logic. If the name is too long and cumbersome, entering the logic statements could become tedious. If the name is too short or cryptic, you may not remember what it is later. However, you are free to adopt your own naming convention within the limits of the following rules:

• All letters are case insensitive (“A” is the same as “a”).
• Only the letters A through Z (upper or lower case), the digits (0-9) and the underscores “_” may be used. No other symbols or characters may be used in ProcessModel names.
• Names must begin with a letter of the alphabet or an underscore “_”. (e.g. Item5 or _Item5, but NOT 3_Item).
• Names must be single words (use underscores “_” for spaces).
• DO NOT use hyphens, e.g., High-Color would be invalid.

If no name is assigned to an object, a default name will be assigned. Some words are reserved, using one of these words will result in an underscore being appended to the name.

When entering numbers as a constant or within an expression, you should follow these rules:

Entities are the items or people being processed—e.g., products, documents, customers, etc. An entity is defined by selecting an entity shape from the shape palette, placing it on the layout, and entering any applicable information for that object in the properties dialog.

Entities are represented by graphics you choose from the palette. They will be shown as moving graphics during the process simulation. Using meaningful graphics in the model to represent entities in your real system will allow others to accurately visualize the flow through the process. They are processed at activities and are moved on routings from activity to activity. Entities can have an initial cost and collect additional costs from processing at activities, movement on routings and from the use of resources. There are hundreds of predefined entities in ProcessModel from all major industries.

Any ProcessModel graphic can be used as an entity (activity, resource, storage, link, label). To use a non entity graphic as an entity, double-click on the graphic and change the object type to Entity.

Each pre-defined entity graphic is assigned a number by ProcessModel. These numbers are used only for the NewGraphic statement (see NEWGRAPHIC).

Name The name of the entity (e.g. Customer, Product_A, etc.). The entity name is used primarily for decision making and reporting purposes. It is simply a descriptive attribute that may be changed during the simulation and tested for making process decisions. Entity statistics are reported based on the final name of the entity.

When you add an additional text label to an entity, place the label on the center of the entity. Otherwise, the entity will appear smaller during simulation.

Statistics: Yes / No This selection determines whether statistical information will be collected, displayed in the scoreboard, and reported in the Output Module for this entity.

The maximum number of entities that can be displayed in the simulation scoreboard is 12. That number cannot be modified.

Object Type Allows the type of object to be changed from Entity to something else.

The identification of cost is optional and has no effect on the behavior of the model.

Initial cost The initial value assigned as the cost of each newly created entity (negative 1,000,000 to 1,000,000). Once assigned, the entity cost may be increased automatically during the simulation based on waiting time, activity time, and resource usage. This cost is added to the pre-defined Cost attribute of the entity.

To learn more about costs, see “ProcessModel and Activity-based Costing”.

Activities are the tasks performed on entities—e.g., assembly, document approval or customer checkout. An activity is defined in terms of the activity time as well as any resource requirements. User-defined action logic may also be specified for an activity. Activities have a processing capacity and may have input and output queues associated with them. Resources connected to an activity are captured before the activity takes place and freed after it has ended.

Name The name of the activity (e.g. CheckIn).

Capacity The maximum number of entities (1 – 999,999) that can be processed concurrently (either individually or in batch). Scenario Parameters may be used in place of numeric values. INF may be used to represent the largest numeric value allowed (999,999).

Stats on This check box allows you to turn off statistics collection for individual activities in your model. By default, this option remains checked.

Time The time to perform the activity. Any expression including distributions, attributes, or variables may be entered as the time value. If a resource is connected to the activity, the resource is captured before the time is taken. Activity times may also be defined using TIME statements in the Action section of the dialog.

Output Queue Cap. The capacity of the output queue. The output queue is like a waiting area where entities will wait for available capacity at the intended destination (0–999,999). Scenario Parameters may be used in place of numeric values.

Object Type Allows the type of the object to be changed to something other than an activity. For instance, you may want to change an activity object into a storage or resource.

The batching tab allows you to hold entities in queue until a specified quantity is reached. For example, parts might be held in front of a heat treating oven until a specified quantity is reached. The group of part is moved into the oven and the entire batch is heat treated for a specific time. The batch is then moved out of the oven. This batching is performed to increase the efficiency of an expensive resource allowing it cycle only when it has a full load.

A basic explanation of how ProcessModel works may prove helpful. When the batch quantity is reached, all entities are then attached to a new entity (the batch). You may change graphics, set attributes, accumulate cost and assign resources to the new entity. Recognize you are making assignments to the new entity. If the batch is unbatched, the batch entity goes away and the attached entities are removed from the batch and continue on. VA Time accumulated as a batch will be divided among the unbatched entities. Cost added to the batch will also divide to the unbatched entities.

When and unbatch occurs, entities will exit the batch in the same order as they entered the batch.

A batch can consist of other batches. When unbatching, only one level of batch is unbatched at a time.

It is possible to accomplish many other types of batching. For example you could

1. Batch at the end of a shift regardless of quantity – see the model object “short batches”

4. Batch based on multiple criteria — see the model object “smaller quantity because the batch was open too long”

The batch will assume the name of the last entity entering the batch. For example, if you had Car and Truck entities being batched together, and Truck was the last entity to enter the batch, then the batch name would be Truck, regardless of how many of each entity type were contained within the batch. The batched entity name ‘Truck’ can not be change with the ‘New name’  property in the properties dialog.

Attaching is just creating a batch. So if a batch was -not- created after an attach operation, and you then unbatch, the attached child entities will be detached. However, unbatching should not be used as a detaching method because of the following; When forming a batch, a temporary entity is created and the batching entities grouped together with it. When you unbatch, that temporary entity is destroyed. Therefore, if you unbatch a group of “attached” entities, the parent entity will be destroyed and the child entities will detach and move downstream in the model.

• None No batching occurs before the activity. (No Batch Size field appears.)
• Batch The activity will batch or group incoming entities (whether or not the entities have already been batched) and process them as a batch. The number batched is defined by the Batch Size field.

An input queue with a capacity that meets or exceeds the maximum batch size is required.

An Attribute may be used in the Batch Size field to set the number to be batched. The specified batch quantity is evaluated each time an entity is batched. If the entity attribute is less than or equal to the number already waiting to be batched, the batch is formed (with possibly a new size) and released for processing. This allows the specified batch quantity to vary if desirable. It also allows for the creation of short batches.

• Unbatch The activity unbatches or ungroups the incoming entity (if the entity has not been batched, the unbatching is ignored) and processes each entity individually.

• Rebatch The activity will batch or group the same number of entities back together that were unbatched previously. This means you don’t have to know how many entities were previously unbatched in order to rebatch them—no batch size is required.

An input queue with a capacity that meets or exceeds the maximum batch size is required.

An output queue with a capacity that meets or exceeds the maximum batch size is required.

• Unbatch The activity unbatches or ungroups entities after the activity has completed processing. If the entity has not been batched, the unbatching is ignored. No output queue capacity is required, but without sufficient capacity downstream, processing could be delayed while the unbatching occurs.
• Rebatch The activity will batch or group the same number of entities back together that were unbatched previously or arrived in quantities greater than one (in which case the quantity batched is the quantity of the arrival). This means you don’t have to know how many entities were previously unbatched in order to rebatch them—no batch size is required.

An output queue with a capacity that meets or exceeds