Making a decision based on a particular condition. Useful when an activity time, action logic, or routing decision is based on the value of an attribute or variable.

To decide on a particular activity time based on the value of an attribute or variable, see Attribute-Dependent Activities.

To decide on a particular action logic based on the value of an attribute or variable, see Recurring Activities.

To decide on which routing to take based on the value of an attribute or variable, see Conditional Branching.

Making a decision based on probability or percentage basis. Useful when an activity time, action logic, or routing decision is based on a random percentage.

To decide on a particular activity time based on probabilities, see Percentage-Dependent Activities.

To decide on a particular action logic based on probabilities, see Suggested Technique for Activity Actions.

To decide on which routing to take based on probabilities, see Percentage-Based Branching.

ProcessModel’s primary costing approach is Activity-based costing (ABC), a method of tracking operating costs directly associated with processing entities. Operating costs are generally categorized as one of two types: variable and fixed. Variable costs are directly proportional to the number and type of entities processed, e.g. the number of customers serviced or the number of products manufactured. Fixed or overhead costs remain constant from period to period, regardless of the amount and type of entities processed, e.g., rent, utilities, salaries, etc. The total operating cost for a period is the sum of all variable and fixed costs for that period.

The two most commonly used methods of tracking operating costs today are traditional (volume-based) and ABC. Both methods treat variable costs in the same way; each entity processed increases variable costs by the unit cost associated with that entity.

Traditional costing and ABC treat fixed costs differently. Traditional costing allocates fixed costs to each entity according to some basis such as the direct labor costs associated with a particular entity. For example, two entity types, A and B, are processed through a system with a fixed cost of $10,000 per week. If entity A consumes 60% of the direct labor costs and entity B consumes 40%, then $6,000 in overhead would be allocated or charged to entity A and $4,000 to entity B.

The key to ABC is identifying and quantifying cost drivers such as the cost of using a resource to perform a particular activity. ProcessModel can track time-based and eventbased cost drivers, including labor costs, resource usage, activity costs, storage costs and material costs. Additional costs may be assigned in any Action logic. This gives you the capability to track any operating costs by entity type. 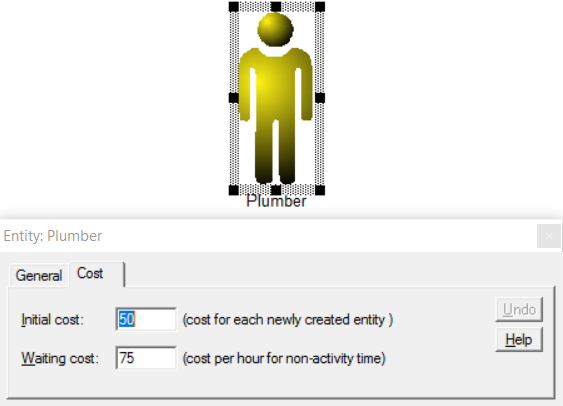 Tracking the cost of using resources (people, machines, etc.) in the model. (The resource usage cost is added to the cost attribute for the entity that uses it.)

1. Select the resource and click the Cost tab on the properties dialog.

2. Enter the cost per hour of usage.

Example: A plumber charges $75 for a house call and then charges an additional $50 per hour for the time spent providing service.

TO DO: Select the resource and click on the Cost tab of the properties dialog. Enter the hourly cost and the cost per use. 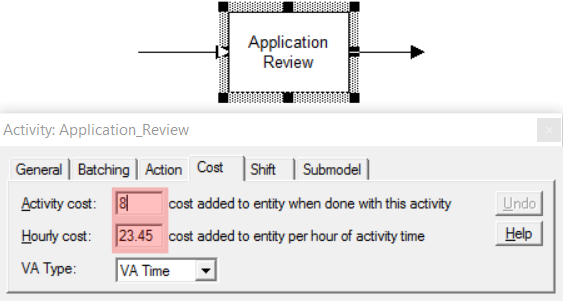 Tracking the cost of an activity.

1. Select the activity and click the Cost tab on the properties dialog.

2. Enter the activity cost when done with the entity.

3. Enter the hourly cost of the activity in process.

Example: The application review activity is modeled without the use of a defined resource, however the review is actually performed by a loan officer whose wages and benefits equal $23.45 per hour. In addition, the bank’s additional overhead cost has been estimated to average $8.00 for every application reviewed.

TO DO: Select the activity and click on the Cost tab of the properties dialog. Enter the hourly cost and the cost per entity processed as shown above.