Routings are lines that connect the locations (activities, storages, etc.) in the model. Ten different kinds of routings allow for great flexibility in how entities move through a model. These routing types include

See The Logic of the Flow video tutorial on routing.

In the Lesson 1 – Call Center model there is only 1 routing type, the 3 percentage routes.

Note: The numbers 25% and 75% shown on the routes above are simply text labels used for clarity and have no affect on the actual percentages used. 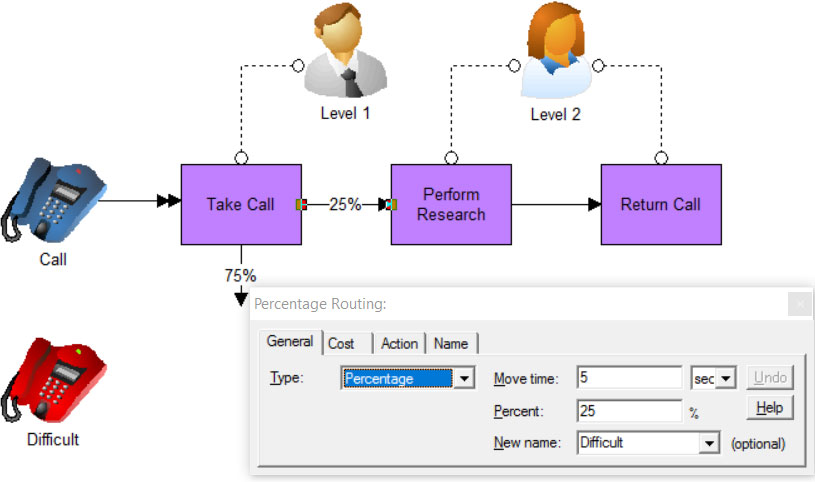 The percentage of entities that should use this route. Only constants are allowed in this field.

This optional field allows you to rename an entity. If you have placed an icon in your model for this new entity, its name will appear in the drop down list and the name should be selected from that list rather than typed in. If no new icon exits, you may type a new name and the previous entity’s icon will continue to be used.

Unique statistics are kept for each entity named in the model. Thus, in the call center example, ProcessModel shows different statistics for Call and Difficult. When renaming an entity, all attributes and statistics are inherited from the previously named entity.

Since cycle time, the time an entity spends in the model, can only be accurately reported if the entity has left the model, stats are not collected until that time. 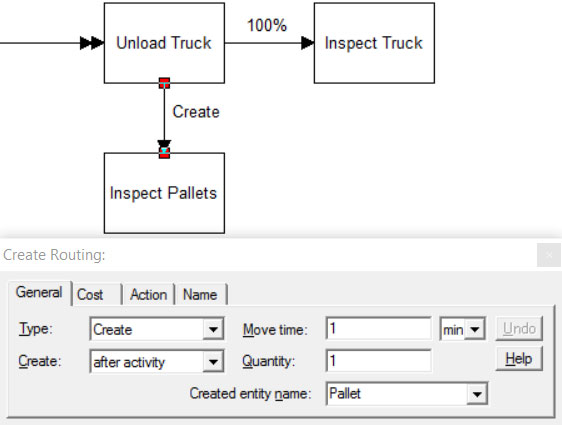 Create “after activity” or “before activity”

The new entity can be created before processing the activity from which originates, or after activity processing is complete.

The new entity must have a name given to it. If you have placed an icon in your model for this new entity, its name will appear in the drop down list and the name should be selected from that list rather than typed in. If no new icon exits, you may type a new name and the previous entity’s icon will continue to be used.

Attach routes are typically used in conjunction with Create routes. This route will attach one or more entities, known as child entities, to another single entity, known as a parent entity, which is waiting at the attach location. Once attached, the combined group of entities continues through the model as a single unit, with the parent entity’s graphic and attributes. Attributes of the child entity are masked by the parent and not accessible unless the entities are later detached.

It is best to either hold the attaching child entities in a storage, or make sure the child activity has an output queue of sufficient size to hold all waiting entities. That way if the parent and children somehow get out of sequence, the attach route won’t keep other waiting child entities from getting passed the entities first in line waiting for their parent. 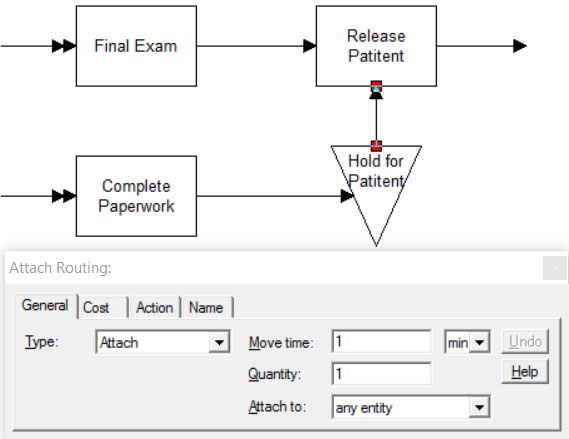 This indicates the number of child entities to attach to the parent entity. Any expression is valid.

The word All can be a useful attach quantity. Let’s talk about two examples.

1. You have created a variable number of child entities using a Create route. You then want to attach all the children which that parent created.
2. You have a varying number of test samples waiting to be picked up by a technician who does a collection run every 2 hours.

The child entity may be attached to any entity or to the entity that created it.

Install the model package Lesson 4 – Create and Attach model. Double click on the create route between Lab and Document Results. 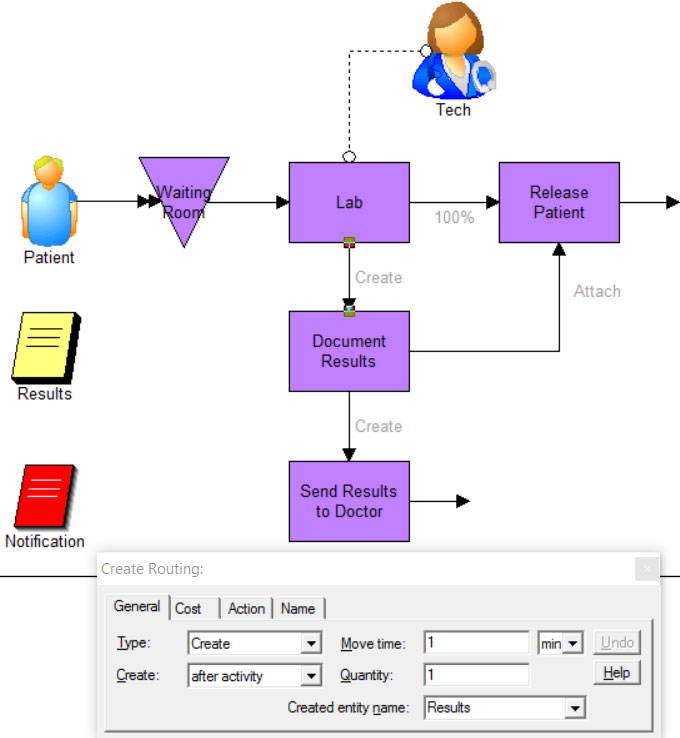 A patient comes into the hospital for a lab test. After taking the test he (the parent entity) takes the 100% route to wait for his results at Release Patient. The test results are created and move to Document Results across the Create route, getting their new name of Results. The results then attach back to the entity that created it (Patient). After all, we don’t want the patient getting the wrong test results. Through the attach route, the patient receives his results and he is released.

As soon as the results have been documented, another create occurs, creating the Notification entity which goes to the doctor.

Double click the attach route between Document Results and Release Patient and review the settings for that route.

Conditional routes determine which route is selected based on a Boolean expression in the route’s Condition field. 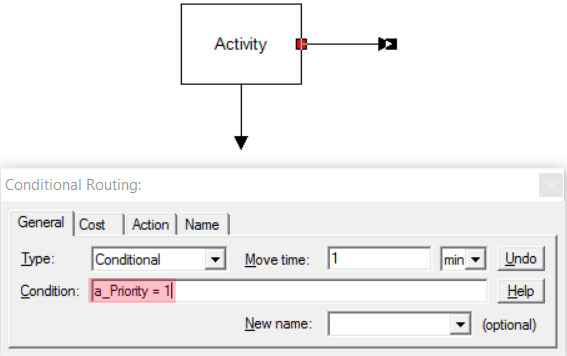 Conditions can contain any Boolean expression and typically include at least one entity attribute. User defined variables may also be used. In the example above, the value of the attribute a_Priority is checked. If the value is 1, then the route is selected.

A detach route caused entities that have been previously attached to the current entity to be detached and routed to the connected activity.

The Else route is used in conjunction with an Attach or Pickup route and is selected if the attach or pickup cannot be executed because the associated parent or child entity cannot be found.

The Ordered route causes entities to wait until and Order Signal is received. The order signal contains two pieces of information: the size of the order to be released, and the reorder level. When the contents of the activity or storage from where the signal originates falls below the reorder level specified, the order is placed, releasing the designated quantity of entities. An order signal is displayed as a dashed line and is connected on the arrow end to the ordered route.

Install the model package Lesson 4 – All Routes model. Simulate it and view each of the routing types and how they work. The red routes are all 100% routes. 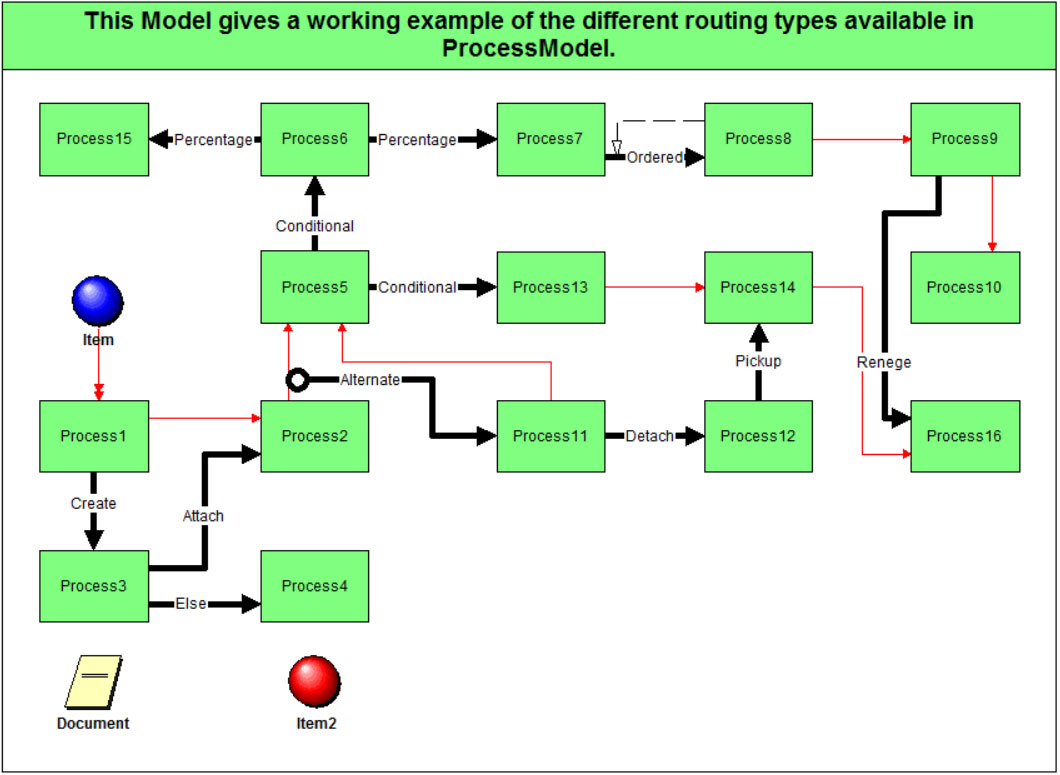 The Document entity is created by the Create route leaving the Process1 activity. Entities following the Renege route on the upper right side of the model are renamed to Item2. The attribute Att1, used in the Conditional routes, is assigned its value using action logic found on the Action tab of the Process11 activity.