Froedtert Hospital, located in Milwaukee, Wisconsin, is the only ACS verified level 1 trauma center in southeastern Wisconsin. The hospital has almost 50,000 visits to the Emergency Department per year. Even though they have a capacity of nearly 450 beds, a staggering 12% of the time they were forced to reject patients requiring emergency care. Of course, this presented a critical problem for patients. But it also represented a significant loss of revenue as well as a black eye on the hospital’s reputation.

What the Model Told Them

A hospital staff member was given the assignment to analyze hospital processes in order to reduce the number of ambulance diversions away from Froedtert. A project was created which included the ICU, surgical capability and scheduling from both emergency arrivals (ambulances) and from elective surgeries. Using ProcessModel, it was determined that doctors had complete control over elective surgery scheduling without the insight of how the rest of the hospital was being affected by their decisions. It also showed that current patterns for elective surgery would stack up randomly on certain days, causing the ICU to fill in order to meet demand. On other days the ICU would be unaffected by elective surgeries. Because of the random loading of the ICU, they were sometimes unable to handle the demands of emergency patients needing ICU services. As a result, ambulances were turned away.

Through simulation, the hospital administrators and doctors were able to see the cause of the diversions. Experiments were conducted to identify an acceptable level of elective surgeries per day while still
accommodating the needs of emergency care. Rather than rely on best guess solutions, ProcessModel enabled Froedtert to use quantitative methods to discover the problem and suggest solutions. They arrived at a definitive number of elective surgeries that would still allow them to meet the emergency requirements of the ICU. Perhaps the most amazing thing learned through modeling their processes was that they could still perform the same number of elective surgeries by altering their scheduling, while being able to handle all the emergency cases needing help.

Doctors and administrators have implemented the solutions, resulting in millions of dollars of increased revenue for the hospital. The most important benefit though is that the hospital can now provide the level of health care needed by their patients, which in turn enhances public relations and the hospital’s reputation. These successes have lead to other projects being implemented in other areas such a reduction of length of stay for patients, optimizing staffing levels, reducing clinic patient wait times, optimizing lab procedures, etc.

Though building a comprehensive model of the complete process was required to gain a full understanding of the end to end impact of process factors, the key issue as far as scheduling was a relatively simple procedure. Load leveling was the key. Let’s look at the model representing the “before” arrival conditions. 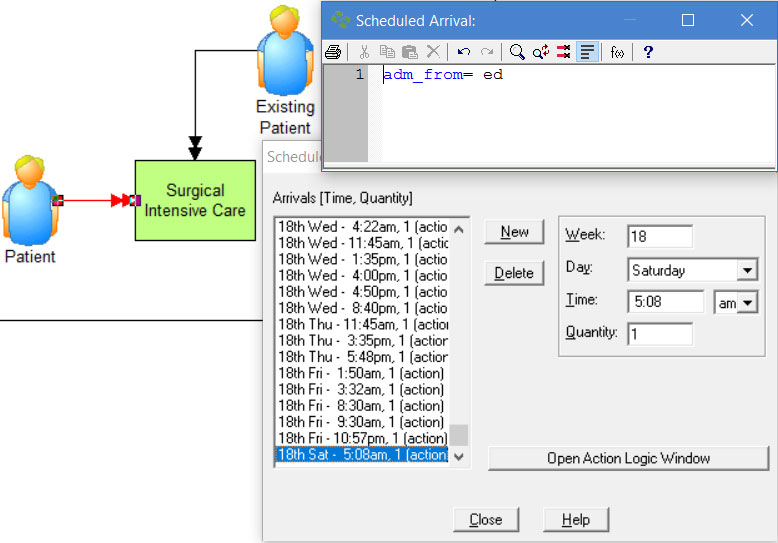 This scheduled arrival covers a period of 4 months. The action logic can be ignored since it will not be used in this case study. But it is used to define attributes of each patient.

Close the scheduled arrival and double click on the Surgical Intensive Care activity. Then select the Action tab. 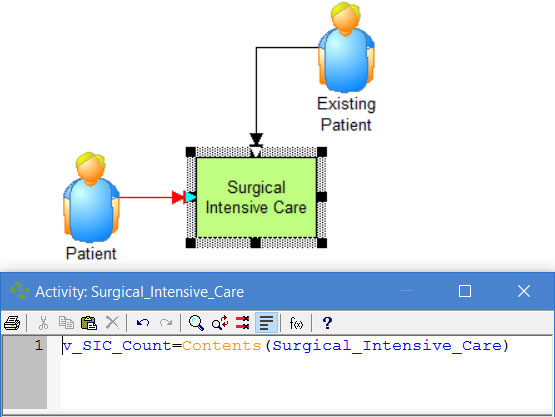 The purpose of this action logic is to assign the variable v_SIC_Count the number of patients in the activity. A Time Series Plot of this variable will be shown when the output report is displayed.

The animation is turned of in order to display the output as quickly as possible. Begin the simulation by clicking the Simulation menu and selecting Save and Simulate. Then click Yes to see the results. 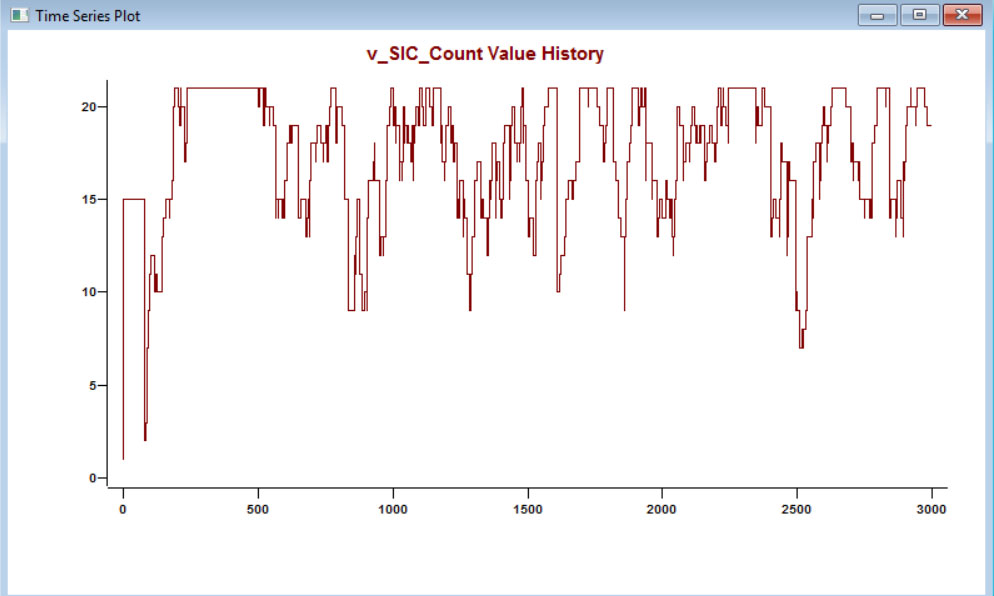 As shown above, the contents of the activity is at its maximum of 21 over 25% of the time. That means that “potentially” 25% of the time emergency patients would have to be turned away. Fortunately there were not always emergencies during those peak times. As noted earlier, the actual rejection rate was 12% which is still an alarming number. 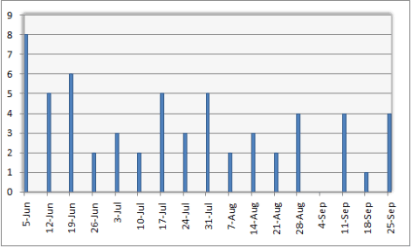 The load leveling goal was to never have more than 4 scheduled procedures per day. The next chart shows the result of load leveling. On days where more that 4 surgeries were scheduled, those extra procedures were simply moved to other days. 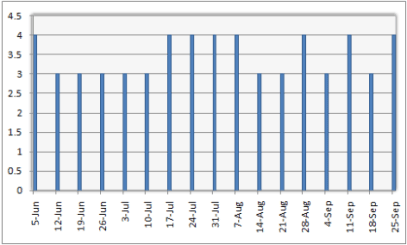 The result of the load leveling was that they were able to maintain the same number of surgeries (elective and emergency) while reducing the number of turned away emergency cases.

Let’s see the results of the new schedule of arrivals found in the next model package.

Install the package file Case Study 3 – Froedtert After and simulate the model. Then view the results. 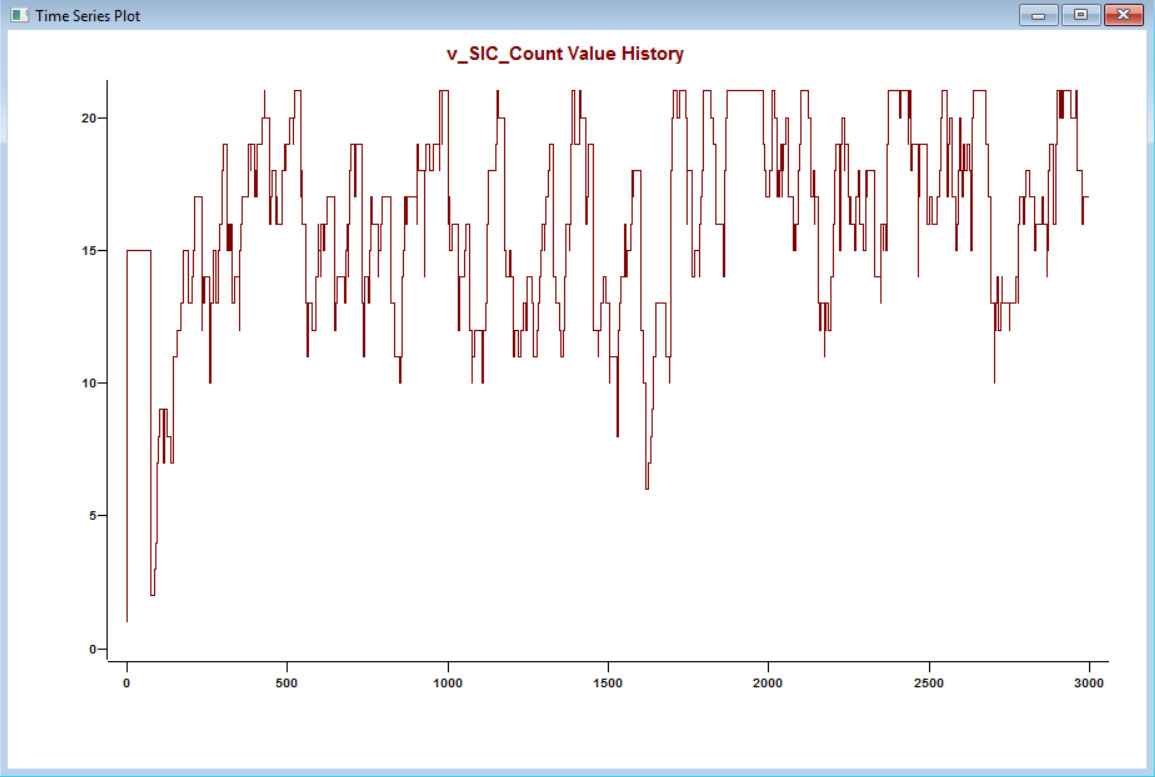 Now the contents of the activity is only at its maximum less than 13% of the time, dramatically reducing the risk of having to turn emergency patients away.