ProcessModel Version 5.6 now available. You will be able to work faster and model systems of greater complexity.

ProcessModel Version 5.6 Allows you to Build an Interface

Read in thousands of arrivals, fully formatted for ProcessModel version 5.6 in just seconds. A template is provided with version 5.6 to import arrivals into with all the attributes needed to define the routing and timing for each arrival. Learn more by looking at the how to model overall patient flow example.

Model objects in Version 5.6 extend the features of ProcessModel so you can model faster and handle tougher problems. Model Objects are self contained plug-in sections of models that are intended to be re-used. A model object contains all of the activities, logic, attributes and variables necessary to run properly when plugged into a model. Model objects are developed for your industry. Many times they handle concepts too difficult for a new user and sometimes even too difficult for a seasoned modeler (Waqas).

Most of these model objects exist because someone like you asked for a new feature. Model objects are those features with one major advantage. Model objects can be updated in seconds without having to change, update or reinstall ProcessModel. 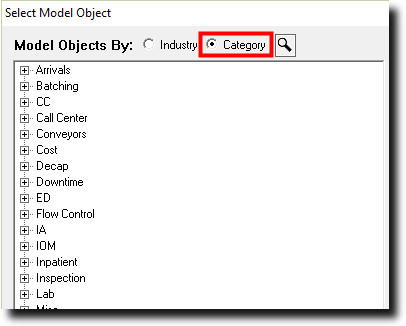 Some examples of how model objects are used are contained in the links below:

See how you can create workcell simulations in minutes. 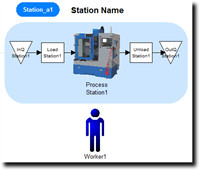 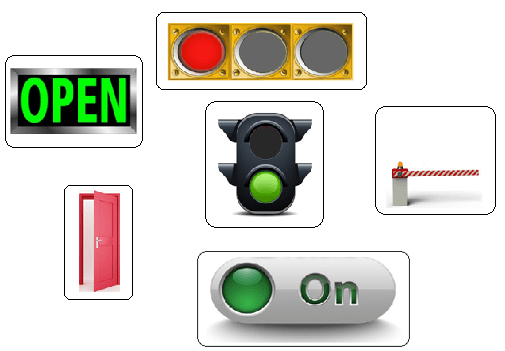 Some of the possible visual indicators available with model objects.

Model objects for on screen key performance indicators to emphasize your main points.

Model objects for healthcare. See an example of how to model emergency room arrivals. 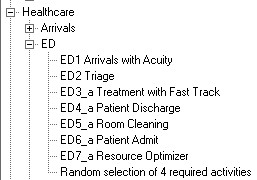 You can now call the same submodel many times from different activities. In one of the projects I have worked on, I needed to call the same logic as many as 100 times. I say “as many as” because the model is built to expand and contract to simulate adding and subtracting equipment on a production line. Each piece of equipment called identical logic that was used to determine the next location. This functionality was easiest to implement as a submodel and was super simple with version 5.6. One linking name links “to” the submodel and another name links “from” the submodel. The submodel keeps track of what activity it left from and returns to the same activity when finished… without any action logic or coding.

Picture another model that simulates maintenance and repair on aircraft engines. The engines are disassembled one stage at a time. Then the blades from the fan are removed and sent to the Non-Destructive Testing (NDT) department. The fan blades are tested for cracks. On passing the inspection the blades are returned to the same work area from which they originated and then reassembled. The NDT is called from 36 different activities in the process. In this maintenance model, using a single NDT submodel is important because the capacity of NDT is critical to determining throughput of the entire system. Building and calling the NDT submodel was a simple task.

Saving and opening of models, with many calls to the same submodel, is lightning fast. A submodel called from multiple locations is only saved and/or opened one time.

The new help system is linked directly to the “user’s guide” by chapter and section. This is good, because the users guide is over 600 pages. In addition, the users guide is linked directly to helpful blog articles. This is good also, because the blog articles provide greater depth and examples. This will get your new users up to speed faster with greater confidence.

The help system is online, which allows support to modify help “On the fly” based on questions or needs of groups of users. You get the latest, most up-to-date help possible.

Once ProcessModel version 5.6 is installed, you will not need admin privileges to license your software, making the process faster and easier for companies with strict corporate policies. Model objects can be updated easier because the model objects are no longer saved as part of the software, but in places that can be accessed and changed by the user.

This update for ProcessModel customers with active support is simple and free. Contact customer support to get started or download the trial version.