Skip to content
You are here:Home>Emails, Knowledge Base>How to Model Emergency Room Arrivals

How to Model Emergency Room Arrivals

What does this Process Improvement model object do?

Your boss gives the directive that you are going to build a process simulation of the emergency room. So that you don’t become one of the acuity 1 patients yourself, recognize there are a series of model segments available to quickly tie together elements of the emergency department. These elements are called Model Objects and they link together so that you can use some or all the objects to build up a model to support your process improvement project. This model object takes arrival “date and time” information along with the initial a acuity to create all the patterns necessary to represent the variable arrivals of your emergency room. The whole process takes less than a minute and saves you hours data manipulation and coding.

How does it work? 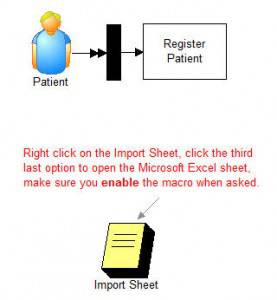 Open the model object titled “Healthcare Arrivals Import with Acuity.” The model is very simple and is designed analyze your data and provide a method to represent all the patterns used from the analysis.

Right-click on the graphic labeled “Import Sheet.” This will open up an Excel spreadsheet. You will want to make certain that macros are enabled.

A simple export from the current hospital system can prepare the data. All that is needed is the time stamp when a patient registered at the ER and their initial acuity assessment. 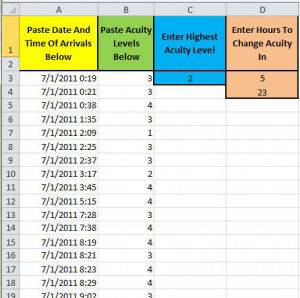 The Healthcare Arrivals spreadsheet receives a the pasted from data collected by the hospital’s systems over past months. For a process improvement project, consider 6 months as a minimum time span for extracting data.

The blue box requests the number that is considered the highest acuity level in your system. For example if your hospital was using a 5 level acuity system and 1 was given to a patients under cardiac arrest, then you would you would enter a 1.

In some hospitals there will be large disparity in acuity from day to night. This may happen in large intercity populations where there will be a shift to a higher percentage of serious cases during late evening and early morning. The brown boxes allow the use to enter a night starting time (cell D4) and a morning ending time (cell D3) for the acuity shift. This will allow patients to be given an acuity assignment during the process simulation based on day or night patterns. If your are not certain if there is an acuity shift from day to night, experiment with several different entries to determine the need. It just takes a minute to experiment.

After the “Prepare Arrival Data for ProcessModel” button is pushed, the spreadsheet will go through a series of tests on the data and extract information needed to develop patterns for distributions that will later be imported into the ProcessModel model object. The analysis may take couple of minutes for 50,000 lines of data so be patient with your patients data. After the analysis finishes, you will see two new tabs in the lower left corner of the spreadsheet.

The data is summarized to provide insight. Graphs and charts are included to help visualize the patterns. 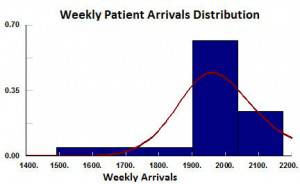 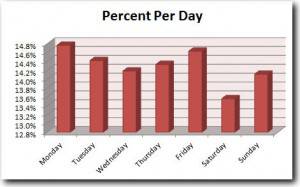 How calls have historically been distributed across the week.

How the volume of patient arrivals varies for each hour of the day. 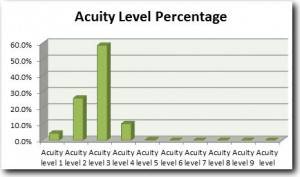 The graphs above give a clear picture of the ED arrival patterns for a small city. The information above is converted in to action logic for a simple “copy and paste” into ProcessModel. A sample action logic is show below. 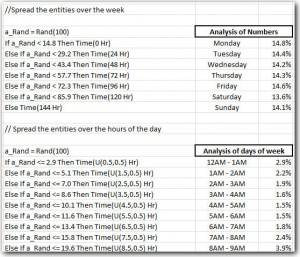 Action logic to be copied into ProcessModel

In this model object, there is a black box activity that has the purpose of spreading arrivals over the week. The action tab is selected for the black box and the previously copied action logic can be pasted in place of the example data.

The process of using this model object is very fast, saving hours of data manipulation and analysis.  If a person knew what to do, it would take about 4 hours to perform this this type of analysis and prepare the distributions for ProcessModel. Now you can perform this analysis as often as needed because it only takes minutes. That should reduce the stress encountered from developing a process simulation. So hang up the phone, because there is no reason to call 911. You are going to be just fine on this process improvement project. With this and the other model objects for healthcare, you can speed through your simulation modeling and make great decisions for your hospital. Happy modeling.