The key to efficiency and success in the workplace is properly managing and allocating resources such as personnel, space, tools, inventory, etc. Sometimes “the way things are” or “the way things have always been done” are not the most effective means of producing the end result. At The Company*, an application of lean production principles led to improved service operations. Lean production principles involve trimming the fat and the superfluous aspects of industry and relying on the essentials to get the job done.

The Company wanted to examine ways in which latencies and cycle times could be reduced in the following areas: residential telephone repair 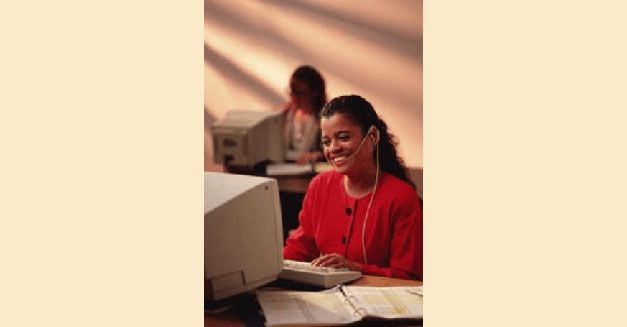 services, high-speed (DSL) Internet access connections, and appointment scheduling (both telephone installation and repair services). Each of these areas involved incoming orders whose arrival rates varied by time of day, day of week, and season.

The orders followed complex paths through their respective processing systems, often crossing functional, organizational, and information system boundaries. Bottlenecks often resulted because of mismatching of resources to demands and lack of communication between key processes. As a result, it was difficult to predict the cycle times between the initial call from the customer and completion of the customer order. This ultimately cost the company time, money, and loss of customer goodwill. Obviously, the order processing systems needed to be restructured.

The Company realized it needed to change its techniques and methods. They decided simulation modeling, using ProcessModel, was the selected avenue in which to view and experiment with the big picture on a smaller scale because it wouldn’t involve a large upfront cost. The simulation studies were conducted under the guidance of XYZ Associates, a telecommunications analysis consulting firm, and the Mathematical and Statistical Modeling Team in The Company Advanced Technologies, the research division of The Company. The studies revealed that “orders flow through the service systems in a manner completely analogous to the way that parts flow through a production system.” With this in mind, it was decided that the same techniques used to streamline production systems could be used for service systems.

Through ProcessModel, The Company was able to explore ways to more smoothly handle customer orders. Each project, including data collection, model building, and output analysis required about eight weeks. The models were able to demonstrate how the implementation of lean production principles could greatly decrease workload, yet increase efficiency.

Key insights are described below. The simulation model showed that the tail end of the repair call handling process, the manner in which repair orders are assigned to field technicians, had a major  impact on overall system performance. There are two different types of field technicians: those who have a designated batch of jobs to complete before the end of their shift (bulk technicians), and those who are given jobs on an “as-needed” basis (dynamic technicians). The model showed that by increasing the proportion of dynamic technicians to bulk technicians, while keeping the total number of technicians constant, dramatically improved cycle times. The analogy to lean production is that of large batch versus small or no-batch (JIT) production.

Orders for DSL service were assigned a “promise date” indicating when the customer should expect service to be activated. The dates were scheduled relatively far out, creating in effect, a large buffer lead time on order completions. The modeling system showed that this disguised the fact that there were “statistical fluctuations” (lack of equipment, incorrect information, lack of coordination, etc.) that could not be foreseen ahead of time. However, significantly reducing the lead time by decree alone would cause too many orders to be late. The model showed that it would be best to proceed in the same manner as traditional manufacturing systems transitioning to a lean production environment:

We developed a model to explore which operating policies and process characteristics would most impact a proposed appointment scheduling system involving both telephone installation and repair. The model showed that a lack of communication from downstream processes to upstream processes would have a major impact on system performance. By synchronizing the timing of appointments scheduled with the jobs actually completed by technicians, the technicians could be used more efficiently. Benefits included a decrease in the number of missed and late appointments, less overtime, and smaller end-of-day backlogs.

In examining the application of lead production principles to large service delivery at The Company, “we saw the positive effects of going to small batches in providing telephone repair service, fixing quality problems and reducing lead time in providing Megabit installation, and synchronizing work flow in scheduling and executing appointments for telephone repair and installation. It is likely that many large service systems could benefit from the same approach.”