When Will You Need This?

Ease of Use: Easy

How to Use the Model Object

Open your model or create a new blank model.

2. Insert the Model Object into Your Model

2. Move the cursor to the point of insertion and left mouse-click. The upper left corner of the model object will be inserted at the location of the mouse-click.

3. Connect to Your Model

1. Connect the percentage routes entering Storage1 to the locations in your model where unique entity types will come from.

Make sure the resource connector lines are maintained as-is. Altering them will cause the prioritization to work improperly. 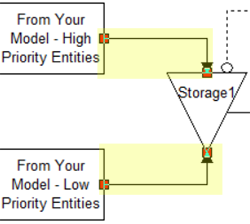 2. Connect the percentage route leaving Process1 to the location in your model where you want the prioritized entities to continue to.

1. Goto the action logic tab of the two routes entering Storage1 and update the values for a_Priority1.

If you have priorities set elsewhere in the model you can remove the action logic on these routes.

Each route contains action logic which determines the entity priority with the top route having the highest priority. If you need to add more routes, make sure you include action logic similar to the existing route’s action logic, unless you are setting priorities elsewhere in the model.

1. Change the names of Storage1, Process1, and Worker1 to match your organization.

The Worker1 resource must be dedicated to the prioritization process and should not be used for any other purposes in your model.

The model object is now integrated into your model, you should now be able to save and then simulate the model.

How Do I Build This Model Object from Start?

2. At Storage1, the Worker1 resource is captured using the priority attribute name a_Priority1 in the resource connector’s Priority field.

3. Worker1 is freed when the Process1 activity is complete.

Notice that Process1 does not have an input queue, Storage1 works as the input queue for Process1.