ProcessModel allows you to design custom behavior in your model by using action logic in which you enter simple but powerful logic statements. Action logic allows you to define special logic that may not be easily defined using the normal property fields. Examples would include assigning values to attributes and variables or performing a test using an IF…THEN statement.

Action logic can be defined for any activity, storage, arrival or routing by clicking on the Action tab of the properties dialog.

Depending on the object or connection for which the action is defined, only certain statements and other logic elements are meaningful and therefore valid. The valid statements and logic elements (variables, attributes, resources, distributions, operators, and scenario parameters) are available via the Keywords and Filters (

) dialog. These statements and elements may be pasted from the list box into the action window to help you construct the desired action logic. 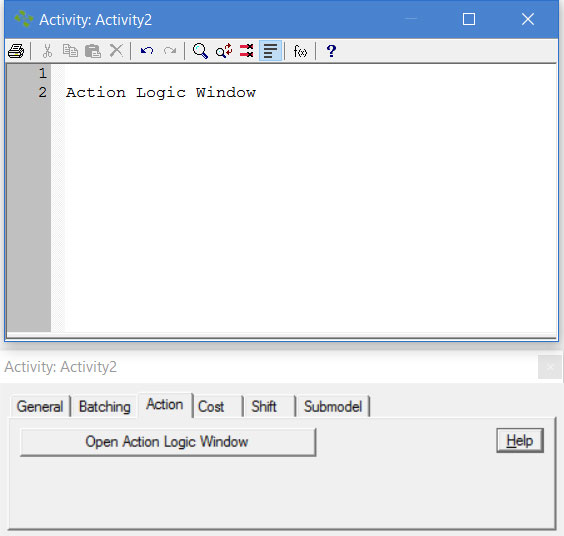 You may also start typing your saved attributes, variable, scenarios, scenario parameters, activity, entity, resource names or any of the ProcessModel supported statements, functions or distributions to see a help menu popup to help you easily populate what you wish to add. 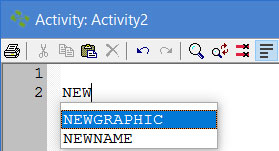 Paste elements into the action window

button on the action logic window.

2. Select the type of element (including statements) you want from the pull down box.

3. Select the specific element or statement from the list box.

4. Press the Insert button to insert the element at the position of the cursor in the action edit window or simply double-click the item.

Action Logic often uses expressions (combinations of attributes, variables, numbers, and operators) in assigning values to attributes or variables, testing the value or state of a variable or attribute, etc. For more information on expressions and valid operators, see Expressions.

Functions provide you with critical system information at any given time during the simulation. They can be used in an assignment statement to set the value of a variable or attribute or in an IF…THEN statement to make a decision based on system information. There are several system functions: Clock(), Contents(), FreeCap(), FreeUnits(), GroupQty(), OwnedResource(), Percent(), and ResQty().

A common use of the Clock( ) function is collect and plot individual cycle times for entities. It can be used to help collect individual times in just part of the model or individual entities for the entire cycle time. Why would this be important? Doesn’t ProcessModel automatically collect and report the average cycle time for each entity type? Yes it does, but a major reason for simulation is to dig deeper than averages, because averages are misleading.

ProcessModel automatically notes the simulation clock time when each entity first enters the process and writes that information to a default entity attribute called CycleStart. You can use a formula below calculate and record the processing time for each entity.

Each entity that crosses the action statement that contains this formula will find out the current simulation time, subtract the starting time of the entity and write the result to variable defined (in this case, v_Time).

Many times, however, it is helpful to know the time it takes for an entity to complete only a portion of the process, for example activities 4 to 6 of a larger process. In this case, you would enter a_attribute1 = clock() in the action logic of the route entering activity 4. [Not specifying a unit of time by not putting anything in the parentheses after “clock” causes ProcessModel to use the default time unit which is minutes.] This would cause ProcessModel to note the time that each entity enters activity 4. You would also enter v_variable1 = clock() – a_attribute1 in the action logic of the route leaving activity 6. This would cause ProcessModel to take a new clock reading, subtract from it the first clock reading, and write to a variable that reflected the difference which you could then track in your output reports.

A car wash has an activity called Wash that often gets too busy for one operator to handle so the supervisor then comes to help. The logic below models this situation with an IF…THEN statement and the CONTENTS() function. As long as the activity contains fewer than three cars, the worker processes any arriving car. However, if the contents of the activity are greater than three, the Supervisor may also be used.

GET Worker OR Supervisor

Returns the available capacity of an activity (an integer).

Suppose an entity can be routed to one of two identical ovens for a curing process. However, you would like to ensure the ovens are loaded as evenly as possible at all times. The following logic could be used to set an attribute (called a_Router) to a 1 or a 2 based on the available capacity of the ovens. Conditional routings would then be used to route to the appropriate oven:

FreeUnits(name of activity or resource)

Returns the free units of an activity or resource (an integer).

The example below demonstrates the use of the FREEUNITS() function to adjust the processing time for an entity based on the number of units of a resource available to process it. Once a Plane arrives at a passenger gate, it captures a certain number of resources named BH (Baggage Handlers). Operation logic at the gate determines how many BH resources have been captured and, accordingly, how long it will take to service the Plane. The more Baggage Handlers a Plane captures, the less time it takes to service it.

In the case of multiple levels of groups and loads, GroupQty() returns the number of entities in the uppermost level only.

A group of documents called Folder arrives at the Secretary in-box and is processed for some amount of time according to the number of documents in the folder. Each document takes 3.0 minutes to process.

This function cannot be assigned a resource name in Action logic. For example, an assignment statement like OwnedResource() = Worker_1 will generate an error.

The percent function allows you to execute one or more statements only a certain percentage of the time. Used in an IF…THEN statement, the function returns a TRUE or FALSE.

To use the percent function, enter PERCENT(n) where n is the percentage of the time that the statement will return a TRUE condition in an IF…THEN statement.

The example below demonstrates the use of RESQTY() to adjust the processing time for an entity based on the number of resources available to process it. Once a Plane arrives at a passenger gate, it captures a certain number of resources named BH (Baggage Handlers). Operation logic at the gate determines how many BH resources have been captured and, accordingly, how long it will take to service the Plane. The more Baggage Handlers a Plane captures, the less time it takes to service it.

Statements are simply commands to be executed at particular stages in an entity’s progress through the process. The following pages explain in detail each statement listed below.

Comments You can add explanatory comments to your action logic by placing special characters in front of the comment. Comment lines are for user information only and the simulation ignores them during run time. To include a single-line comment, use a pound sign “#” or two forward slashes “//” at the beginning of the line. Multiline comments begin with a “/*”… and end with a “*/”. Some statements and functions such as GET or FREE are not ignored when found in a single comment line. To ensure they are ignored, you must use the multiline /* . . . */ comment indicators, and the ending “*/” must appear on a different line than the opening “/*”.

FREE, GET, and JOINTLYGET, PERCENT and GROUP statements are not ignored by the // comment indicator. Use the /* … */ comment indicators. These indicators are normally used to comment multiple lines. So if you are only commenting out a single line, the closing */ must appear on a second line since it cannot exist on the same line as the opening /*.

IF Test = Reject THEN INC RejectQty
/*Number of rejects increased
for each test reject.*/

// The logic below describes how rejects are handled.

This is the assignment statement which allows you to assign a value (or descriptor) to a variable or to one of the attributes defined for your entities.

The ANIMATE statement allows the control of the animation speed through the action logic dialog.

speed A numeric value between 0 and 100. One is the slowest and one hundred is the fastest speed of animation. A speed of zero turns the animation off.

The ANIMATE statement is usually implemented by placing a separate entity, arrival and activity combination in the existing model. Scheduled arrivals work well because the exact time can be assigned for the arrival(s) and individual action logic applies for each scheduled arrival. The first arrival could be used to “fast forward” to a time in the model of particular importance, while the next arrival could be used to slow the animation for inspection of a particular aspect of the simulation and then a third to again “fast forward” to see the results.

name This is the name of the variable or attribute to be decremented.

[expression] You can optionally decrement the variable or attribute by more than one using an expression which can be a constant or a mathematical expression. The name and expression must be separated by a comma. (The square brackets illustrate only that this element is optional.)

text string The message ProcessModel will display. The text string must be enclosed in quotes.

This example displays the entity name during simulation.

The display statement is valuable for debugging complex models and for halting a model temporarily during a presentation to display information.

The free statement allows you to free a resource (or resources) being used by the current entity.

[quantity] The number of units of the following resource to free. If no quantity is used, the quantity is assumed to be one. (The square brackets illustrate only that this element is optional.)

resource The name of the resource or list of resource names to be freed. If any resource specified is not being used by the current entity, it is simply ignored.

ALL The keyword used with the FREE statement to free all captured resources.

In the following example, an entity, which earlier captured the resource Operator, frees the Operator after a three minute activity time. This action is followed by an increment of the variable called v_TimesUsed.

If no action statements follow the freeing of a resource, the resource can just as easily be freed by drawing a Free resource assignment connection between the resource and the activity.

The get statement enables an entity to obtain a resource. ProcessModel attempts to capture the resources in the order they are listed. If multiple resources are requested, but not available, those that are available will be captured and tied up until all are available.