Skip to content
You are here:Home>Emails>Turn Raw Data Into Process Simulation Arrivals

Have you ever wanted to create arrivals patterns for a process simulation automatically from historical data? I mean to read in raw data from one of your databases. Well, it’s good to want… Because intense want breeds innovation to to fulfill those wants. This model object fulfills that want by turning thousands of lines of “date and time stamps” into accurate arrival patterns in just seconds. The “seconds” is important because if you had to do this process manually it would take hours…if you knew what you were doing.

As an example, let’s say that you had stripped data from your telephone system. The data might look something like the following:

…but with thousands of lines of data representing months of time. Each entry signifies when a call entered the automated call distributor. From these thousands of lines of raw data, patterns must be extracted. These patterns describe the variation in call quantities from week to week, the variation based on the day of the week (Mondays may have higher call volumes than Wednesday, etc.) and the variation from hour to hour during the day (Example: low call volumes in the early morning with peaks at 12 noon and 4:00 PM).

An example weekly call volume is described by the red curve in the graph below. That red line is translated into a distribution that can be pasted into the quantity field of the arrival connection in the model object.

Next, the calls need to be spread over the days of the week and hour of the day. The two graphs below show how the arrivals could be spread out for a process improvement project. 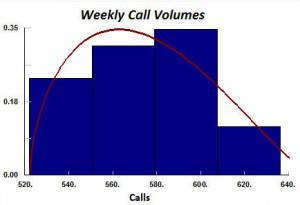 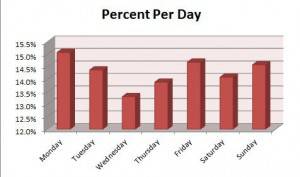 Process simulation arrivals distributed over the days of the week 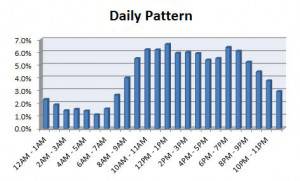 Process simulation arrivals spread over the hours of the day.

Once the analysis is done, then the distributions need to be formatted for the process simulation so that the simulator can represent the behavior of the real system. This formatting is automatic. If you have a complex process simulation, where each day of the week follows a different pattern, than the model object will format each day separately. Then the formatted information can be copied and pasted into ProcessModel.

The portion of the model object used in your model is very simple. Most of the “heavy lifting” or analysis and formatting is accomplished in the spreadsheet attached to the model object. The “weekly pattern arrivals import” model object takes what would be about 4 hours of analysis (and formatting) and condenses it into about a minute. Now that’s what I call process improvement!