Skip to content
You are here:Home>Emails, Knowledge Base, Model Building>Transfer Attributes from Child to Parent

Transfer Attributes from Child to Parent

Have you ever wanted to pass information from one entity to another during a process simulation? It is an odd question, but maybe you will be able to understand how important it is with a couple of examples. First, what if a medical check was found deficient during the underwriting process? The policy might be worked on at the home office, while the medical examiner could find the potential client has serious markers for cancer. The real question is “how to you transfer the quality information from the child (created entity) to the parent entity (the source of the creation)?”

Second, how can you accumulate all of the costs parts assembled? The cost is a result of the sum of the pieces and accumulated resource usage. This requires the addition (rather than transferring information) from one entity to another. 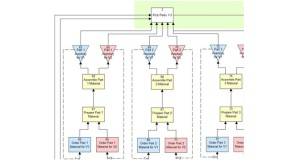 How to Transfer Attributes During the Process Simulation

The key to transferring any element from one entity to another is really very simple. Save the value of the attribute for the child entity just prior to the assembly (attach route action logic) to a Global variable. Then, just after the assembly, transfer or increment the attribute in the parent entity (the entity being assembled to) by the global variable.

During the process simulation, the attach action logic (before the assembly) and the action logic at the receiving location (after the assembly), can happen in succession with no delay or chance for interference. This trick allows for the successful transfer of attribute information from one entity to another.

The model object titled “Transfer Attributes from Child to Parent” handles all of the nuances to increment cost, value-added time and transfers quality information from child to parent entities. This model object will also handle the proper addition of attributes and variables so that your process simulation will work correctly the first time.