Skip to content
You are here:Home>Emails>Process Improvement to Hierarchical Modeling 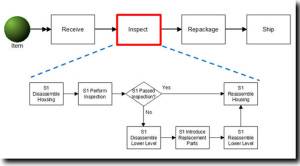 Hierarchical models offer many advantages during a process improvement project.

Route Names are so Insensitive

In the past, route names were case sensitive. In version 5.5 and above, every field of ProcessModel is insensitive to case changes.

Named routes are the connectors in hierarchical models. If a named route leaving a submodel is connected to anything, or if the arriving route was connected to anything but an entity, you would get an error. The problem was if you wanted to move a model with many exits or arrivals, the ends of the pesky arrows (routes or arrivals) would remain locked position while the rest of the model would move. Now the arrows can be connected to object with types of “links” or “activities” and the whole model will move as one.

You would probably remember if you had ever created a model package with a submodel still open. I remember that day clearly because it destroyed my model. Well, I did what you would do if you owned this company. I got mad, then fixed the problem.

See only the Missing Files During Package Creation

In the past we we would show you all the files selected during a create package. There were several problems with our approach. First, you were only shown the top level unless you opened the tree diagram, so it wasn’t a quick look to spot a missing file. Second, you couldn’t see the entire file name so you might not know which file it was even if you knew one was missing. Third, it didn’t happen very often so it was and extra step and a waste of time. Our process improvement is to show only dialog if a file is missing. When a file is missing from the package, the tree diagram showing the structure and the file names is expanded so that you can see in an instant which file is missing and read its entire name.

New capabilities in hierarchical modeling will help your process improvement projects go together faster than ever before. I hope you enjoy the changes.