Who is American Ordnance and what do they produce? American Ordnance LLC (AO) is involved in process improvement of ammunition manufacture for  the United States Military. They produce a variety of ordinance including the M430, 40 mm grenade shown below. 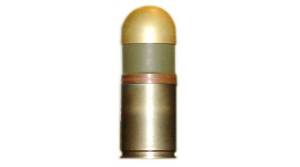 The grenade can be fired from a single shot, light, hand-held launcher or from machine gun that shoots 350 rounds per minute. The grenade is effective to 1600 meters and can penetrate 2 inches of armor. As you might imagine, the use of this round could change the course any engagement against infantry or or light armored vehicles. Since the machine gun is relatively light and has low recoil it can be mounted on small vehicles, boats or even carried. The grenade and delivery systems are so effective that they have been employed all branches of the military.

The grenade is produced primarily with automated equipment with some manual intervention. In one section of the production, an indexing table was used move product though ten stations indexing dial system. The indexing table would increment 36 degrees approximately every 12 seconds. In the first station the parts for two grenades would be loaded on to a fixture. In the next assembly area glue would be placed on the threads, etc. until the last station where the grenades would be removed and placed on a conveyor. For a variety of reasons, the production rates needed to be increased. 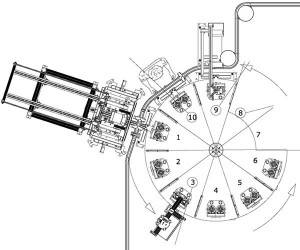 Each of the stations of the indexing table had variable production times. The variation came from manual intervention or time changes due to rejects. Only when all stations were complete would the table index. Because of this variability the slow station would change randomly  (from 1 to 5 to 3 to 8 to 10), making calculation of the throughput a nightmare. It seemed as though it would be impossible to predict the throughput accurately for changes.

Several changes where proposed but a few became the darlings. One change in particular was identified to make the largest improvement to the system. It was proposed that the table would index twice then perform the final assembly in 2 stations at the same time. From the manual calculations this proposed change seemed as if it would almost double the throughput. So persuasive where the arguments that the money was set aside for the project. Vince Villont, a senior engineer suggested that all the proposals could be tested accurately with simulation before investing any money. He was given approval and the simulation was built. From start to finish it took two days to build the simulation. The as-is model behaved very close to the real system.

How did ProcessModel help American Ordnance?

Vince stated “ProcessModel allowed us to test various ‘what if’ scenarios and see the various outcomes.”

Vince said, “In fact, the simulation prevented us from making a significant capital investment that would not have produced the result I believed it would be capable of.” One of the single changes slated for implementation would cost over $50,000, but would not provide the anticipated improvements so it was canceled.

Vince went on to say, “The beauty of the process model is we are able to build in variables for random events such as parts unavailable, non- continuous flow, start-up / shutdown, breaks & lunches, reject rates, etc. This provided real world testing and helped me to identify issues causing us lost time not associated with the performance of the equipment.”

An experiment of the process simulation could be run in just seconds allowing the process improvement team to see the effects of any decision before live changes were made. Because this type of simulation is very visual, you can show the simulation to others and help them to “see” why some changes will work and others will not. Sometimes it is the combination of several changes that provide the best solutions. At American Ordnance it was this visual capability that allowed the process improvement team to drive management and the process experts to consensus quickly.